I Have SEVEN books free or on sale today! So here’s THREE CHANCES FOR GREAT STUFF

I’m the AUTHOR OF THE WEEK on BingeBooks.com this week, so I put a bunch of books on sale!

So here’s your first opp:

Finished reading Kilty as Charged yesterday and loved it!  Amy’s combination of humor, action, just enough romance, and humor really hit me perfectly — and made me laugh out loud.Repeatedly.  Added to which, she wrote a charming, hilarious male maincharacter. I very much enjoyed her writing style and sense of how toemploy the deft lampoon. It is now imperative that I read the otherbooks in the series.  — Marcus Cootsona, Author of the Severin Force Political Thrillers

And here’s your third opp:

Click to visit my author page on BingeBooks.com (click and it will take you there). You’ll see a tab there that says “Reader Buzz” — leave a nice little note about how you like my books (if you do!) and I’ll enter you to win an ebooks of mine — your choice! Maybe I’ll give everyone one… depends on how many people do this so I don’t go broke… At least TEN people though!

It would be nice if my home there had some nice comments for visitors to see!

Give a Friend the Gift of Their Next Favorite Series!

You could win a KINDLE READER + Instantly Gain Access to Free & 99c Books!

Jackson Kelly may have been middle-aged
And the vice-president of the exclusive Oceana Resort Hotel,
But Jackson loved to surf
And he loved the ladies, who were mostly young women he referred to as his “diversions.”
When he dies on the beach while surfing with no apparent injuries, the question is: “What happened to him?”
Too bad he had an angry looking rash on his leg.And Dani and Arthur were only at the resort to cater a dinner meeting for the resort’s stockholders! When the coroner says, yes, it was murder, they have their work cut out for them – another mystery to solve.The owner of the resort and his family have a lot to gain financially if Jackson’s dead. But maybe it was a crime of passion. His wife or current “diversion” could have done it. A lot of interests to be protected. Greed, revenge, hatred – those are all possible motives.This is the third book in the Chef Dani Rosetti Cozy Mystery Series by a USA Today Bestselling Author.

The Middle Finger of Fate (The Trailer Park Princess Book 1) by Kim Hunt Harris FREE FOR A LIMITED TIME!

When Salem Grimes stumbles onto a dead body on her way to an AA meeting, she does what any self-respecting Christian would do—freaks out and screeches words that would make Jesus blush.
However, learning her ex-husband, Tony, stands accused of the murder spurs Salem into action. Eager to help, she makes the bold decision to investigate the case as an amateur sleuth. What she lacks in skills, qualifications, or a general clue on how to find, well, clues, she makes up for with the genuine desire to help.With her octogenarian best friend, Viv, and beloved dog, Stump, by her side, can Salem’s faith lead her to answers that will clear Tony’s name? Or will this be one more element of her life she has boggled up?From USA Today and Wall Street Journal Bestseller Kim Hunt Harris, comes a hilarious and heartfelt mystery full of side-splitting laughs and shocking twists! 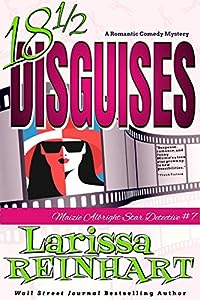 AN OLD FRIEND MURDERED AND A NEW FRIEND IN JEOPARDY

“A mixture of adventure, mystery, and romcom. So like Hollywood, you’ll never figure out what is real and what is make-believe until you reach the end.” — Laura’s Interests
#DisguisedDetectiving Maizie Albright might have once played a (teenage) private investigator on TV, but she’s now living the (adult) part. Her (mother’s) name is on her business cards. Her (boss’s) appointment book is brimming with new clients. And her bank account has grown large enough to finally trade in her dirt bike for an actual new (pre-owned) vehicle.

And then there’s Wyatt Nash. Love of her life. Future father of her…

And then there’s Wyatt Nash. Future partner in her business. Not now. Later. Right now, they’re waiting for Maizie to get her PI license and for Nash to get out of the red so they can get on with…

Just what, Maizie isn’t so sure. But she is sure about one thing. She’s ready to take on her own cases. To prove she’s more than just a (washed-up actress) assistant private eye.

When Maizie finds her costume designer friend killed during a masquerade gala, it’s the opportunity Maizie hoped she’d never get. An investigation into an old friend’s murder. But one that’s also put her new friend in jeopardy.

While the police begin their inquiries, Maizie starts her own case. She’s needling Black Pine’s wealthy do-gooders, threading through lies, stitching together clues, and ripping out false leads. Her investigation may cost Maizie her job, her relationships, and her life. But by unspooling the truth, Maizie’s darned if they stop her from catching a killer who’s sew evil, it’s shear madness.

What if your beating heart becomes the reason someone wants you dead?When a troubled, homeless veteran covers her vintage Cadillac with paper snowflakes, Lalla Bains decides a showdown is needed. Unfortunately, she arrives too late for that conversation as she finds him lying on the ground, stabbed with his own scissors.
As she kneels down to help a sound causes her to look up, and a figure is silhouetted against the late afternoon sun.
She calls out for help but the figure disappears, leaving Lalla shocked as she realizes a killer now has her marked for murder.
“A must read!””Crime solvers- this is a must read to add insights into hearts and motives. Author Dahlke invites you to journey into her books in this series as well as previous and soon to be releases. I recommend this book with a high 5- star rating.” Valerie Caraotta (CONYERS, GA, US) – See all my reviews (TOP 1000 REVIEWER)