A Couple of Halloween Treats – Death By Banana Bread

When a giant inflatable Halloween witch goes missing in the Pineapple Port retirement community, Charlotte’s eager to nab the culprit. Before she can lift a fingerprint, someone threatens to kill a new neighbor who looks like an adorable Pomeranian but possesses a disturbing talent for revenge.  Moments later, a stranger demands the return of a mysterious wooden box… or else.

Charlotte’s romantic interest, Declan, isn’t having a great morning either. His calculating ex-girlfriend has returned to claim she’s the rightful owner of his pawnshop. She’s livid he’s found a new lady, and she is not the sort of person you want angry at you…

Eh. Things could be worse. At least Charlotte doesn’t know that a mojito-swilling killer is on his way to Pineapple Port…

I’ve been baking up a storm lately — figured out adding 1/4 cup of lemon juice to my bread makes it rise better and gives my sourdough and even nicer tang! This weekend I had to find a way to use 2 blackening bananas… so I made this banana bread recipe up by modifying some things I found online. It was GOOD, so I thought I’d share it.

I thought I’d save some pounds by using almond flour and then ate the whole damn cake in about a day and a half so… probably some flawed logic there.

The light things are regular bread (A loaf and some rolls). The dark one half covered in foil is the banana bread… half-covered because I ate a piece before I remembered to take a photo!

And another big cozy mystery sale for October!

Sometimes what we’re most thankful for…Is the fact that we’re still alive.Cupcake baker, and amateur sleuth, Melissa Beckett, is swept off of her feet when her romantic hubby and mischievous best friend conspire to give her a break, whether she wants one or not.Once Missy finally agrees, she and Chas are able to get away and relax…at least until tragedy strikes and they find themselves trapped in an isolated lodge, with a very suspicious cast of characters. Everyone around them suddenly seems to have a dark side, and the clever couple must decide who they can trust…if anyone.Will their trip of terror strand them away from home, family and friends, on the most food-filled, thankful holiday of the year?Find out in this heart-pounding Cozy Thanksgiving Mystery. It will keep you on the edge of your seat! 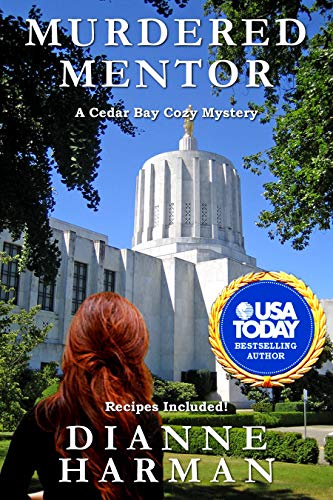 Everyone looked up to the Senator,
And he mentored so many people.
A few knew about his mistress,
And even his illegitimate daughter.
But no one knew his ultimate secret.
A secret that would only be revealed when he died,
But death did come a little sooner than expected.Kelly’s son, Cash, is running for the Oregon Senate with the blessing of Senator Johnson. But when the Senator dies, long held secrets come out, even some about people who were threatening to blackmail him. And was he really murder? Could it have been suicide?Only his wife knows, but she’s become mentally incapacitated. Kelly and Mike never planned to get involved in this case, but sometimes, you just have to do the right thing.An inspirational page-turning cozy mystery that will leave you with a smile on your face, a tear on your cheek, and a belief in your fellow man.