A Few Things To Be Happy About in December

If you read about my Monster Chocolate-Orange-Cinnamon Stickybun FAIL, (recipe is there) the good news is I tried again and they were a big success. Heck, they even LOOKED like sticky buns this time. I forgot to take a picture of the whole tray but I had my mother (the giftee) take a picture to prove my redemption. ——–> Having eaten the whole thing myself this time, I didn’t steal any of these. …At least no one caught me.

Obviously, one of the best ways to spread a little joy is to put my Christmas book on sale!

3. My new release, Pineapple House Hunters, $2 off until Friday

It’s been getting GREAT reviews and I’m super happy and grateful!

When Declan and his uncle Seamus find a dead woman in the master closet of a house for sale, Seamus hopes that means he’ll get a deal…but private detective Charlotte Morgan is more interested in why the body has a note pinned to its chest:

Where are you going to keep YOUR clothes?

Too bad Charlotte’s neighborhood “moms,” Mariska and Darla, can’t help with this mystery — they’re on a treasure hunt that’s definitely going to cost them their weekend… and maybe their life!

I’m having a giant BOGO event on AuthorsXP.com — featuring 70+ books either free or discounted! All sorted by genre so you can find the ones you want and grab them!

I’ve also got a giant Holiday Book Fair full of books ready for download, but free and on sale!

And if you don’t have a tree, just throw some lights over your three-foot-tall teak pineapple. Everyone has one of those. It isn’t just me, is it?

Try not to think about the fact the first half of 2021 doesn’t sound that great either.

Some Sales and New Releases from my author buddies… 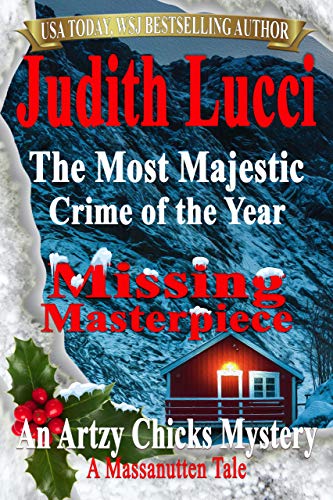 The Most Majestic Crime of the Year: Missing Masterpiece: A Massanutten Tale 99c Preorder

The gun-toting Artzy Chicks, Lily and LauraLea are off on another adventure.
This time, they’ll leave Massanutten Mountain behind to venture off to uncharted waters.
Uncharted for them anyway.
Flying to London was the easy part.
Their newest creation, The Majestic Norway, had been selected for auction aboard a prestigious cruise ship bound for Norway.
They’d planned to sit back, relax, and enjoy the tranquil atmosphere.
Maybe even check off one of their bucket-list items and view the spectacular northern lights.
As usual, things didn’t go as expected.
Amid suspicious Vikings, irate security guards, and a terrified cruise staff, LauraLea is missing her gun within hours of departure.
What have they gotten themselves into this time?

Dropping Like Pies is a cozy mystery masterpiece of comedy, suspense and intrigue. The best new cozy of the year, from the hottest new author.
Yes, someone drops a pie. And clues are dropped like breadcrumbs through the small town of Pine Grove.
Lucky for everyone, Miss May is a former lawyer with a finely tuned ear for truth. May knows that truth reveals all. And she pursues justice at all costs.
May’s best friend Teeny is a chihuahua who thinks she’s a pit bull. The lady has lots of bark. Plenty of bite. And somehow she survives on a diet of cake and sprinkles.
Chelsea is the quiet weirdo. Every crew has one. But Chelsea has more suitors than she can handle. There’s a hunky detective. And an eccentric boyfriend. They’re both cute, in different ways, and they both want the best for Chelsea. But all she wants is to solve this murder!
Who was buried on the orchard? Why were they killed? And what are our girls going to do about it?
You’ll love this cozy because everyone loves suspenseful mysteries with close-knit friends. 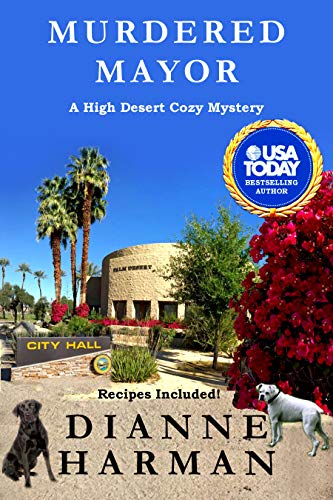 The famous cowboy movie star
Had become the dearly beloved mayor of Palm Springs.
Too bad he was murdered.
But who could have done it and what was their motive?
Greed? Political rival? An environmental extremist?
Son? Stepdaughter? Ex-wives?
And what about his present trophy wife?
Then there’s that pesky proposed desert windmill turbine project.
They kill a lot of birds,
And the Desert Bird Sanctuary members were certainly
Against the proposal.
The mayor’s vote was needed to approve it.
Maybe he was going to vote against it.
Was that why Monty Madsen was murdered?
And maybe Monty wasn’t the only person in Palm Springs
Who wanted to be the mayor!
There’s a colorful cast of characters,
But only one of them is a murderer.Join Marty, her husband, Detective Jeff Combs, and their psy