Someone get my dog out of the pool…

We’ve been playing with Archer in the pool and now it’s all he wants to do.  He won’t leave the step unless we make him – loves sitting more than actually swimming. But he WILL swim if pushed. Literally.

Yesterday I spent a good part of the day swimming out to fetch a tennis ball, grabbing it in my teeth, and swimming it back to Mike to show him (Archer, not Mike) swimming is fun… but all he really wants to do is this:

Let him out to go to the bathroom? Pool.

Follows us outside to water plants? Pool.

Get’s bored in the house? Asks to go out so he can stare at Pool.

We had to put chairs in front of the steps to keep him out, though I’m sure it won’t be long until he’s flinging himself off the side.

He climbs on the floaty chair when it’s sitting on the side of the pool and waits for me to push it in so he can float around.

I have to put sunblock on his nose, though, to protect a little pink spot he has on top.

When he’s not in the pool, he’s bringing us gifts so we’ll let him to the pool… Like entire palm fronds… Though when it comes to pets gifting dead things, I’ll take the palm!

Well, at least I can take a relaxing shower…

Win up to 30+ Mystery eBooks & Gain Access to Deals & Steals on even more!

After two years of hard-fought sobriety, Salem Grimes is ready to move forward with her life. She and her husband, Tony, lost ten years of their marriage to Salem’s drinking, and they can’t afford to lose any more. Salem is proud of the progress she’s made, and now it’s time to make the next step back toward a ‘normal’ life – maybe even have that baby she knows Tony wants.

As exciting as it’s been hanging out with her octogenarian partner-in-crime-solving friend Viv, Salem doesn’t need to join Viv in looking for a runaway girl – until she learns that she and that girl share a mutual acquaintance. Someone from Salem’s past. Someone who hurt her. Someone who’s reappearance in her life is such a shock, it sends Salem into a tailspin and derailing all her progress. Will finding the runaway girl help get her life back on track? And more importantly, will there be a life for her to go back to?

The most emotionally intense Trailer Park Princess story yet. 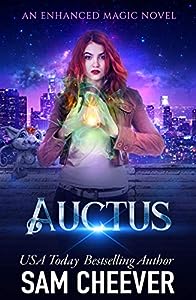 Auctus…Augment: A portal protector and her baby gargoyle, a guardian daemon, a hellhound, and a witch. Together, they must survive in a strange land filled with unknown monsters. Combined they must be strong enough to defy an elite group of magical terrorists. They are Auctus, augmenting the magic flowing through her world…but will they be enough?

I’m Glynn Forester. I’m Magis. More. Recently, in an attempt to save my friends and home from the Body, a group of elite magical terrorists, I accidentally dragged them all through the portal I’m charged with protecting. We ended up in a place where monsters thrive and nothing is familiar. Survival is our first order of business. I need to figure out how to provide food, clothing, and shelter to the people I brought with me.

Though the power of this new place sings through my veins, filling me with magical purpose, I’m in way over my head. I don’t know how to take care of so many people. I was barely scraping by just taking care of myself and Boyle, my baby gargoyle.

And then there’s Hawk, a powerful daemon guardian whose touch turns my bones to goo. And Nicht, his faithful Hellhound, who is fierce and deadly, unless he’s giving a certain baby gargoyle horsey-back rides across my living room.

How am I going to keep my people safe? How will I save my friends who we were forced to leave behind? What will I do about the Body? And the portal? And Grams? And…so much more?

One thing is clear. My relatively safe, slightly boring little world is gone, gone, gone. And I am up to my eyeballs in challenges I have no idea how to meet.

This should be interesting.

Just when you’re on top of the world…
It starts to spin.Young, handsome, and happily engaged, Spencer Bengal has finally hit his stride.
The former Marine and Head of Security for Beckett Enterprises has moved from muscles and guns to the boardroom, with a natural talent for business, and the education to match.One phone call turns his safe and comfortable world upside down.The past that he’s kept buried, not even speaking about it to his fiancée, has come back to haunt him. Painful memories come flooding in, and Spencer stands at a crossroads in his life, having to decide if he’ll be the better man, and bury the hatchet, or walk away, with bitterness eating him alive.A tragic event has everyone he knows up in arms, and even puts his own future with Beckett Enterprises in jeopardy. Taking a short leave of absence to work on the toughest case he’s ever had to tackle, a family dynasty is depending upon him to find the truth…before it’s too late.There’s trouble in paradise when a miscommunication comes between Spencer and his fiancée, and it may signal the beginning of the end of their relationship.While everything collapses around him, Spencer must find the strength to carry on. Can he rise to the task?
Find out in this enthralling Cozy Mystery!Author’s Note: While this book is part of the Calgon Chronicles series, it can be read as a standalone.