Book Release – You want The Girl Who Wants (I promise)

The Girl Who Wants is OUT TODAY!
(Save $2 for a limited time!)

NEW SERIES!  I put everything I had into making this the most fun you’ll have all year (though considering the year, it wouldn’t take much, would it?) Thrills – Action – Humor – Mystery – Family Secrets – a touch of Romance…

Shee wants a home.
Shee McQueen grew up skip tracing and hunting military criminals with her father, Mick, until someone put a bounty on her head, forcing her underground. Resurfacing years later, she returns to her family’s hotel in Jupiter Beach, FL, to find Mick in a coma, shot in the head by an unknown sniper.
Shee wants answers.
The Loggerhead Inn has everything Shee could want in a beach hotel—sea turtle wall art, a tiny Yorkshire terrier mascot who thinks she’s a pit bull, and her father’s staff of deadly, damaged military veterans, looking to redeem their troubled souls by helping others.  Not to mention—
Hold on…
How did Mason Connelly, the SEAL she fell for decades ago, just appear in the lobby? Why did he have to show up now, demanding answers to secrets long buried?
Shee wants it all back.
But someone wants her dead.

From the moment Shee McQueen appears, The Girl Who Wants straps the reader into a twisting roller coaster ride of heart-stopping action, snappy dialog and intrigue. Shee’s quest to recover the life and loves she’s lost brings a depth of emotion rare in such a page-turning suspense. The unique female lead’s funny, irreverent and all-too-human asides will have you rooting for her — and her whole pack of wild, wonderful misfit friends — until the breathless end.

Save $2 off on Amazon

If you love it like I think you will, please review! Thank you!

A fearless investigator. A small town on edge. And Christmas is coming.
Can private-eye Emily Parker catch a killer before bodies start to deck the halls?

A woman is found lifeless in the snow. Following clues that lead Emily dangerously close to the murderer, she is viciously attacked and left for dead. Dazed, but driven to make the streets safe again, she vows to bring the killer to justice.

Can Emily string up a psychotic killer before more women end up in the morgue?

The Season of Lies is the pulse-pounding 8th book in the highly rated Paradise Valley Mystery series. If you like bold women, puzzling twists, and a little romance with your suspense, then you’ll love Debra Burroughs’ thrilling novel. 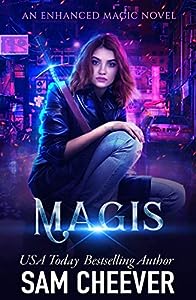 I’m Glynn Forester and I’m Magis. More. I enhance and strengthen magical energy. My power augments rather than creates. But sometimes More is not enough.

My world is fractured between magic and non-magic. The magical elite rule. And they are ruthless and corrupt. They want what I protect. But protecting it has been my family’s job for time before time. So I hide. I hide from those who would attempt to use my abilities for unscrupulous purposes. I hide to save innocents from their venom.

But something’s changing. The world around me is pulsing with malevolent magic, I realize I no longer have the luxury of anonymity. It’s hard to give up my old ways. But I may not have a choice. Others will need my help. And if I deny them I’ll be no better than those who threaten my world.

Will my magic make a difference in this new reality? I can offer Magis. More. But will it be enough? And will there be anything left of me when it’s done?

A mysterious message. A shocking suicide. A case that could blow her career before it begins.

It’s Southern Arizona and PI-in-training Lalla Bains is always seeking problems to fix. But when she volunteers for a all night search-and-rescue in the desert, she isn’t expecting to find an elderly Native American dancing on a cliff… or his cryptic words to her before leaping to his death. And when the man’s grandson shows up at her office demanding to speak to her supervisor, she’s convinced there’s a connection.

And discovering her mentor is padding his retirement fund with blackmail victims, Lalla goes to his home for a confrontation. But her answers go up in flames when the house explodes with him inside. Until she discovers a link between her boss’s murder the body count will only go up.

Can Lalla before she’s fatally ensnared?

A Dead Red Miracle is the fifth book in the Dead Red humorous mystery series. If you like smart female heroines, crazy twists and turns, and fast-paced drama, then you’ll love RP Dahlke’s hilarious whodunit.

A celebrity television chef with a
Fledgling VIP catering company.
A 10-year-old niece she didn’t know she had.
Mix those with poison, car bombs, and murderers
And her carefully laid out plans for a future life become completely upended!Tragically, her parents died in a place crash, and Dani Rosetti leaves law school behind, heads to Paris, and becomes a chef. And not just any old chef – but a chef who goes on to become the darling of the celebrity chef world.

When a rabid fan tries to kill her, she ends her television career as a celebrity chef to start a catering company for the VIPs of the world. What she never expected, after not speaking with her brother for years, is that he had a child, and when he unexpectedly dies, that she would become that child’s guardian. Suddenly she’s Auntie Dani to a ten-year-old.

But someone wants to kill her. It takes all the resources her bodyguard, Arthur, who doubles as her sous-chef, has to keep Dani and her niece safe. Whipping up cream for chocolate mousses was a lot easier for both Dani and Arthur!