How cute is Harley!!?

My own baby, Gordon Labradoodle, passed away Dec. 6, 2017, which I never mentioned because I’m still a disaster over losing him. So, for over a year now, I’ve been getting my dog-fix by smothering every random pooch I pass with kisses, my voice rising to squeaky levels I think maybe only dogs can hear.  (We’re going to get a new baby, but at first it was just too hard and now we’ve been in transition planning our move to Florida so we’re holding off a bit.)

My realtor and now bestest-buddy here in Florida, Jill Geraci has helped me ease my dog-jonesing by letting me babysit her hamster, Harley. (She says it’s a dog but I don’t believe it.) Harley is about one full pound of adorable though. She’s like a mini-Muppet came to life!

It’s nerve-wracking having something that tiny tottering around the house. She slept between Mike and I and we both lie awake all night, staring at the ceiling, terrified one of us would roll over in our sleep. But I’ll gladly take a sleepless night to have her around!

My favorite parts were when she growled at something she heard with that ridiculous little voice of hers that made her sound like an angry Gizmo mogwai from Gremlins, and when we put an ice cube in her water to keep it chilled for her. She decided the cube had to come out and Mike put some music to the whole ordeal…

Cathie Martin of WGRT 102.3 in Port Huron Michigan and I had a lovely chat the other day! Hopefully I was able to warm up a few people with my Florida books up there in chilly Michigan. Thanks for the opportunity to talk Cathie! 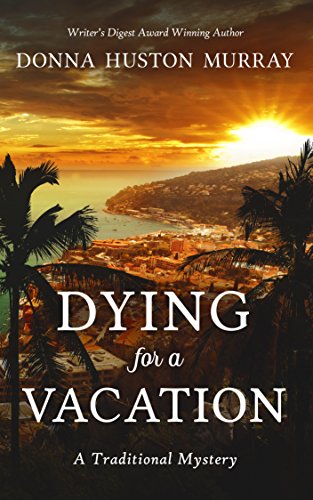 DYING FOR A VACATION: A Traditional Mystery

Writer’s Digest Award Winning AuthorWho could refuse a two-week stay in a chateau perched on the edge of the Mediterranean? Certainly not Richard, who was fed up to his easel with the damp London weather. Babysitting a treasure-filled museum while his old Sorbonne roommate honeymooned in Spain was the least he could do. The vandals who’d been plaguing the chateau wouldn’t dare return, the repairmen Tom hired would be completely trustworthy, and ‘murder’ was only found in something by Agatha Christie. Richard might even meet a woman, someone capable of surprising him like never before. He should go. He really should. He was dying for a vacation.