AVAILABLE FOR PREORDER – The Girl Who Wants (Save $2!)

Thank you to everyone who offered input on my description! I took in all your comments, processed, tweaked and now the first book in the Shee McQueen Mystery Thriller Series is available for pre-order (Save $2!)

I wrote this novel because my FAVORITE genre is the “light thriller” — I love clever bad-ass heroes with complex emotional lives, pulse-pounding action, a touch of romance, bad guys with a touch of darkness — but I also like humor and I can’t deal with detailed torture descriptions.  So I’ve take the idea behind my Pineapple Port series (which I consider a cozy-ish mystery) and created thriller-ish!

The series PACKED with action, secrets, emotion and intrigue. It is clean (no explicit sex, no major cursing (no f’bombs, no name-in-vain. Sh*t is as bad as it gets – I can’t write a book with military characters and bad guys without at least giving them that!). There’s some blood but nothing super gory—if people get stabbed during a fight, they bleed. No torture.

Below is the final description…

Shee wants a home.
Shee McQueen grew up skip tracing and hunting military criminals with her father, Mick, until someone put a bounty on her head, forcing her underground. Resurfacing years later, she returns to her family’s hotel in Jupiter Beach, FL, to find Mick in a coma, shot in the head by an unknown sniper.
Shee wants answers.
The Loggerhead Inn has everything Shee could want in a beach hotel—sea turtle wall art, a tiny Yorkshire terrier mascot who thinks she’s a pit bull, and her father’s staff of deadly, damaged military veterans, looking to redeem their troubled souls by helping others.  Not to mention—
Hold on…
How did Mason Connelly, the SEAL she fell for decades ago, just appear in the lobby? Why did he have to show up now, demanding answers to secrets long buried?
Shee wants it all back.
But someone wants her dead.
From the moment Shee McQueen appears, The Girl Who Wants straps the reader into a twisting roller coaster ride of heart-stopping action, snappy dialog and intrigue. Shee’s quest to recover the life and loves she’s lost brings a depth of emotion rare in such a page-turning suspense. The unique female lead’s funny, irreverent and all-too-human asides will have you rooting for her — and her whole pack of wild, wonderful misfit friends — until the breathless end.

Reserve you copy and get $2 off on Amazon!

PS: (It will probably be out officially before the date I put there… Amazon frowns on pushing dates so I wanted to make sure I didn’t kill my editors with a deadline!)

Enter to Win a Kindle and Get 4 FREE Fun Urban Fantasy Novels INSTANTLY! (Including my Kilty as Charged!)

It’s the last week of my monthly Kindle Unlimited Subscription and Kindle Giveaways!

Summer Snoops Down Under is OUT! 12 Novels for $1.99! (including my Pineapple Lies)

Profits go to helping the Wildlife Victoria charity to help animals hurt and displaced by the Australian wildfires.

Help us Help our Australian animal friends as you enjoy hours of fun sniffing out clues on sandy beaches, in shimmering waterways, at mountain top resorts, and small-town celebrations.

Fetch your copy now to get these furr-ocious cozy mysteries and woof it up with us as we go to the rescue down under!

Judith Lucci: The Most Slippery Crime of the Year: Death on the Slopes – When the pour is just too perfect.
Colleen Mooney: Politicians, Potholes and Pralines – There’s no place like New Orleans to have a good crime!
Anna Celeste Burke: A Tango Before Dying – When trouble waltzes in, it’s not long before Georgie Shaw and Detective Jack Wheeler step in when a famous ballroom dance champion is murdered.
Dianne Harman: Murder in Cottonwood Springs – Sheriff Rich got the call every lawman dreads – a relative’s murder. And it’s even worse when it’s your sister.
Sam Cheever: Bayou Bubba – Where Miss Chance meets Cal Amity.
Amy Vansant: Pineapple Lies – If Janet Evanovich and the Golden Girls had a baby, it would be the Pineapple Port series!
Fiona Quinn: Mine – A sleepy town in southwest Virginia wakes up to a nightmare of untimely deaths.
Cindy Bell: A Tough Case to Crack – It is a race against the clock to solve a murder so Nuts about Nuts can open on time.
J A Whiting: Reversal of Fortune – Will Claire’s paranormal intuition help solve the case or will her skills fail her when she needs them the most?
Kathi Daley: The Curse of Hollister House – How is one to start again after losing the one thing that speaks to your heart and fuels your passion?
Summer Prescott: Spellstruck – If you liked Bewitched and I Dream of Jeannie, you’re going to love Spellstruck. Pirate, the talking cat, will charm your socks off!
Tonya Kappes: Stamped Out – More than mail is being delivered…there’s a murder ’bout to happen! 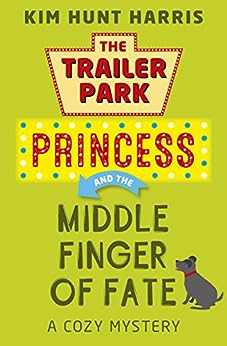 A thought-provoking Christian mystery, full of laughs and plot twists.

All Salem Grimes expects as she walks into the church is her regular Tuesday morning AA meeting, but when she encounters a dead body instead, she does what any self-respecting clueless amateur would do — she freaks completely out and shouts words good Christians aren’t even supposed to know.

But when Salem learns that her ex-husband Tony is accused of the murder, she wonders if God might be steering her toward a chance of helping him and thereby redeeming herself — or at least a chance to make up for the pain she caused him when they were married and she was drinking.

With the help of her new octogenarian BFF Viv and the emotional support of her dog Stump, can Salem keep her act together long enough to sow some good seeds for a change?