So I know Pineapple Jailbird #8 was JUST released, but I’m already half-done Pineapple Puppies, Pineapple Port Mystery #9! I figured after two serial killer-heavy books you could use a cozier one, so this has puppies, baking, horses, plenty of humor… It’s still not a total wuss, it’s not one of those cozies where the whole mystery is to find out who stole somebody’s cross-stitch…somebody dies of course and there’s a mystery that will keep you guessing… but Stephanie and her evil mom are taking a break! 🙂

The book will be out at the end of May and then I’ll write Kilty #5!

Here’s the adorable cover – let me know what you think!

This cozy mystery anthology brings you FOUR fast paced murder mysteries with twists and turns and plenty of suspects and red herrings. Every book in this set has been a bestseller and has entertained thousands of readers.

If you like reading about strong women, small town life, friendships that endure and yummy food with a side of murder, you will love the Pelican Cove Cozy Mystery series. 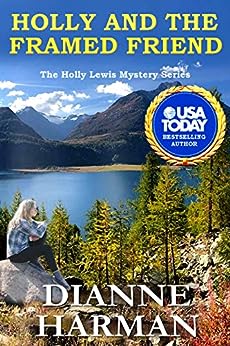 Holly and The Framed Friend

Holly knows nothing about her biological family living in Missouri. When her aunt invites her to stay with them for two weeks after her mother’s murder, she has mixed feeling but decides to accept the invitation.

Once she’s there, she’s determined to find out why her mother chose to live alone and at a distance from her family. What happened, and why won’t her aunt talk about it? Does the diary she finds hold the key?

And who’s been vandalizing the high school? Her cousin’s friend has been accused, but is she guilty? Holly has to use her skills solving mysteries both at the high school and in her family.

If you loved Nancy Drew, you don’t want to miss the debut novel in the Holly Lewis series by two-time USA Today Bestselling Author, Dianne Harman.